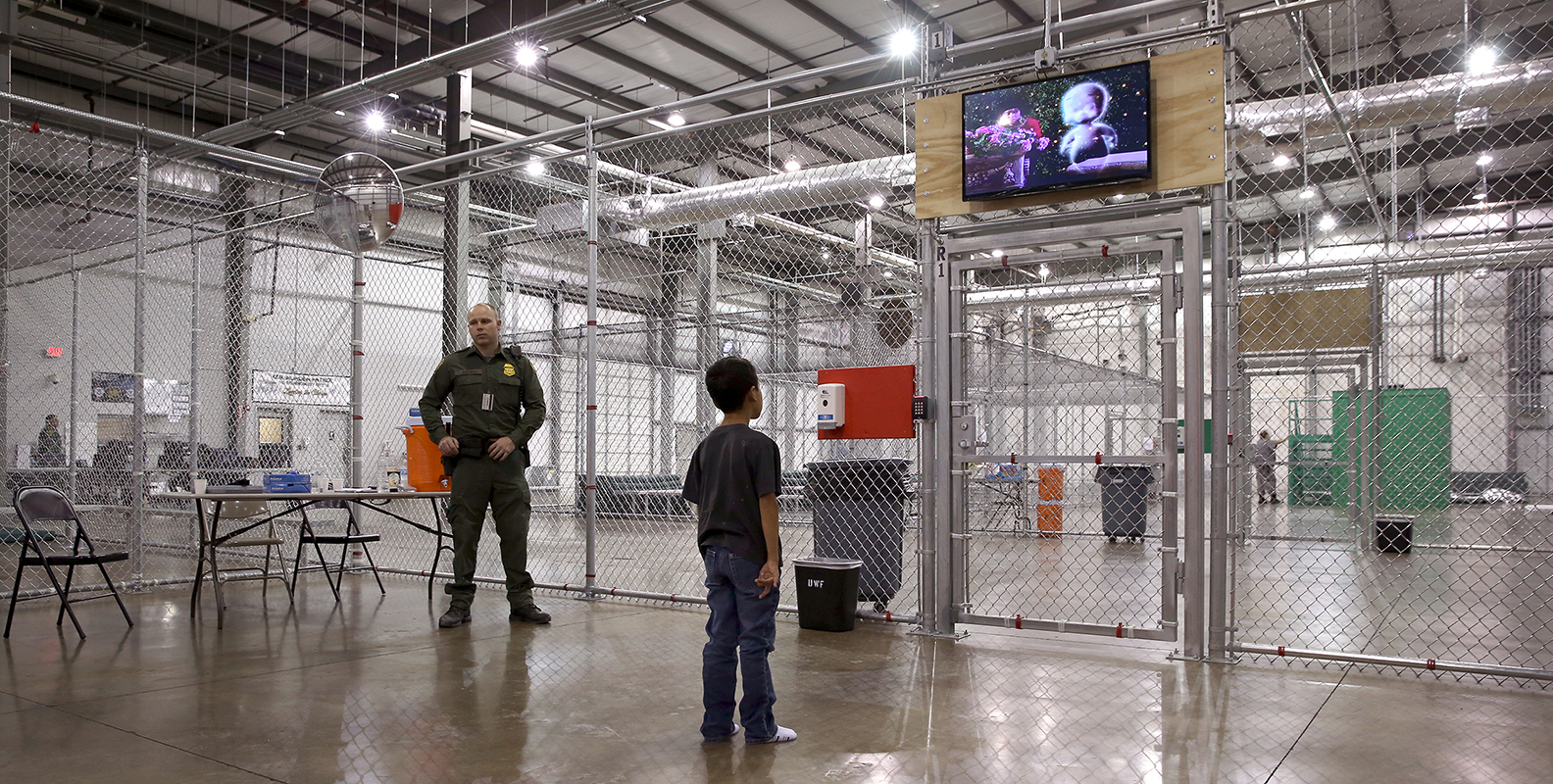 A boy from Honduras watches a movie at a detention facility run by U.S. Customs and Border Protection on September 8, 2014 in McAllen, Texas. The Border Patrol opened the holding center to temporarily children after tens of thousands of families and unaccompanied minors from Central America crossed the border to seek asylum in the United States during the spring and summer. Migrants refer to the facility as “la perrera”, or dog kennel, because of its cage-like fencing.

The Lucie Foundation’s mission is to promote the appreciation and understanding of photography.  In that vein, we are proud to share the courageous stories behind the thought-provoking images in our world, “The Story Behind the Image”.

We also are excited to share the stories of our Lucie Awards Honorees in a video series.  These stories will give both photography lovers and avid news consumers an opportunity to truly understand the impact an image has on social change and our world.  Some of these photographers risk their lives to tell the truth and share their vision.   It is a privilege to learn more about what it took to get these images and what was happening behind the scenes.

We hope you enjoy learning about these images as much as we do.

In light of the current situation with Covid-19, and the need for all of us to assist in minimizing the spread of the disease in our communities, The Lucie Foundation has unfortunately canceled our panel discussion , The Story Behind the Image, scheduled for October.  We will be featuring the the impactful photography of Stephanie Sinclair, John Moore and Natalie Keyssar who will be sharing their stories in videos here and on facebook and Instagram in August, September and October.  Special thanks to Canon for their support.

The Lucie Foundation will resume live programing once the spread of Covid-19 is contained. Thanks for your understanding and patience.

Stephanie Sinclair is a Pulitzer Prize-winning photographer and Canon Explorer of Light known for gaining unique access to the most sensitive gender and human rights issues around the world. She has documented the defining conflicts of the past decade with a fearless persistence. Although she has covered the dramatic events of war, many of Ms. Sinclair’s most arresting works confront the everyday brutality faced by young girls around the world. Her studies of domestic life in developing countries and the United States bring into sharp relief the physical and emotional tolls that entrenched social conventions can take on those most vulnerable to abuse. Ms. Sinclair’s images mark an exchange of trust and compassion. But by consenting to be photographed at their most vulnerable, the people depicted in these images also demonstrate a rare bravery. Beyond photography, Ms. Sinclair has shepherded the Too Young To Wed series into a nonprofit organization of the same name whose official mission is to empower girls’ rights and end child marriage globally.

John Moore is a senior staff photographer and special correspondent for Getty Images. In April 2019 he was honored with the World Press Photo of the Year in Amsterdam for his iconic image “Crying Girl on the Border.” Moore joined the Getty Images in 2005 after more than a dozen years photographing internationally for the Associated Press. He has worked in some 70 countries on six continents and was posted internationally for 17 years, first to Nicaragua, then India, South Africa, Mexico, Egypt, and Pakistan. After returning to live in the United States he began a decade-long project on immigration and border security issues. In 2018 powerHouse Books published his book Undocumented: Immigration and the Militarization of the United States-Mexico Border. His comprehensive and nuanced approach puts a human face on all sides of one of the most hotly debated topics in America today. Moore has won top awards throughout his career, including the 2005 Pulitzer Prize for Breaking News Photography, numerous World Press Photo honors, the Robert Capa Gold Medal from the Overseas Press Club, Photographer of the Year from Pictures of the Year International, the NPPA and Sony World Photography Organization. In 2018 he was given the inaugural Impact Award by the Lucie Foundation. Moore is a graduate of the University of Texas at Austin, where he studied Radio-Television-Film. He lives with his family in Stamford, Connecticut.

Natalie Keyssar is a documentary photographer based in Brooklyn, New York. She is interested in class inequality, youth culture, and the personal effects of political turmoil and violence, primarily in the US and Latin America. She has a BFA in Painting and Illustration from The Pratt Institute. Keyssar has contributed to publications such as The New York Times Magazine, Time, Bloomberg Business Week, and California Sunday Magazine and been awarded by organizations including the Philip Jones Griffith Award, The Aaron Siskind Foundation, PDN 30, Magenta Flash Forward, and American Photography. She has taught New Media at the International Center of Photography in New York and has instructed at various workshops across the US and Latin America with organizations such as Foundry, Women Photograph, The Pulitzer Center on Crisis Reporting, the IWMF and International Photography Festival of Puebla, Mexico. She is a Pulitzer Center grantee, a long-term fellow with the International Women’s Media Foundation Latin America program, the winner of the 2018 ICP Infinity Emerging Photographer Award and the 2019 PH Museum Women Photographer’s Grant.

The Story Behind the Image with John Moore

(The Boy in the Cage) A boy from Honduras watches a movie at a detention facility run by U.S. Customs and Border Protection on September 8, 2014 in McAllen, Texas. The Border Patrol opened the holding center to temporarily children after tens of thousands of families and unaccompanied minors from Central America crossed the border to seek asylum in the United States during the spring and summer. Migrants refer to the facility as “la perrera”, or dog kennel, because of its cage-like fencing. © John Moore, Getty Images

(Crying Girl on Border) A two-year-old Honduran asylum seeker cries as her mother is searched and detained near the U.S.-Mexico border in McAllen, Texas on June 12, 2018 © John Moore, Getty Images

The Story Behind the Image with Natalie Keyssar

In Caracas, Venezuela. March 20, 2018, Katherine poses for a portrait with her daughter at her in law’s house in the Observatorio neighborhood of Caracas. As a crippling economic and political crisis has caused widespread hunger, and drove over 4 million to flee the country before borders were sealed due to the pandemic, SecoCheers, one of Caracas’ best and most well known cheerleading teams, struggles to stay afloat. Many of their dancers have joined the tides of migration.  The girls that remain, led by their trainer Caridad Seco, continued to rehearse 3 times a week in a public gym’s cafeteria, and perform at competitions for the top national teams as well as government events and private parties, until quarantine was imposed.

The Story Behind the Image with Stephanie Sinclair

Ritu Saini (foreground), 21, and Rupa, 23, enjoy the monsoon rains atop a roof in Agra, India, in 2016. Both women are survivors of acid attacks. Hundreds of women and girls a year have been injured by acid in India. Formerly a volleyball player, Ritu was attacked by her cousin. After several reconstructive surgeries, she lost her left eye. Rupa was attacked when she was 15. The group Stop Acid Attacks advocates for policies to help acid-attack survivors.

Ritu dancing with other survivors at the cafe.

The Lucie Foundation supports the non-profit organization Too Young to Wed (TYTW) , whose mission is to empower girls and end child marriage globally. Led by National Geographic photojournalist and activist Stephanie Sinclair, TYTW provides visual evidence of the human rights challenges faced by women and girls, amplifies their courageous voices, and inspires the global community to act—transforming influential advocacy into tangible action in the communities where the girls in our images live. In addition to its original reporting and advocacy work, TYTW’s programs support the protection, education, psychosocial wellbeing, and economic empowerment of child marriage survivors in areas where the abuse is most egregious and underreported, including in Kenya, Nepal, Yemen, Nigeria, and India.

The Story Behind The Image made possible by the support of our partner Canon.

The Story Behind The Image with Shahidul Alam

“On the night of 5 August, I did not know if I was going to live or die,” writes Shahidul Alam, one of Bangladesh’s most respected photojournalists, essayists and social activists, remembering his arrest, torture and eventual 101-day incarceration in Keraniganj Jail in 2018.

Please watch Shahidul speak of a particular image, the one that is on the cover of is new book The Tide Will Turn and The Story Behind The Image.

The Story Behind the Image with Maggie Steber

Maggie Steber is the 2019 Lucie Honoree for Achievement in Photojournalism

Maggie is a documentary photographer specializing in humanistic stories and has worked in 67 countries. In this video she speaks of a particular image she captured in Haiti, 1987 which also lead to be the cover image of her book, “Dancing on Fire: Photographs from Haiti”.
Watch Maggie speak about The Story Behind The Image.

The Story Behind the Image with Al Bello

Al Bello is the 2019 Lucie Honoree for Achievement in Sports

Al is a New York based Sports Photographer at Getty Images. Watch Al speak about The Story Behind The Image bringing us back to the 2012 Olympics in London.
Image caption: Christina Loukas of the United States competes in the Women’s 3m Springboard Diving Semifinal on Day 8 of the London 2012 Olympic Games at the Aquatics Centre on August 4, 2012 in London, England. (Photo by Al Bello/Getty Images)