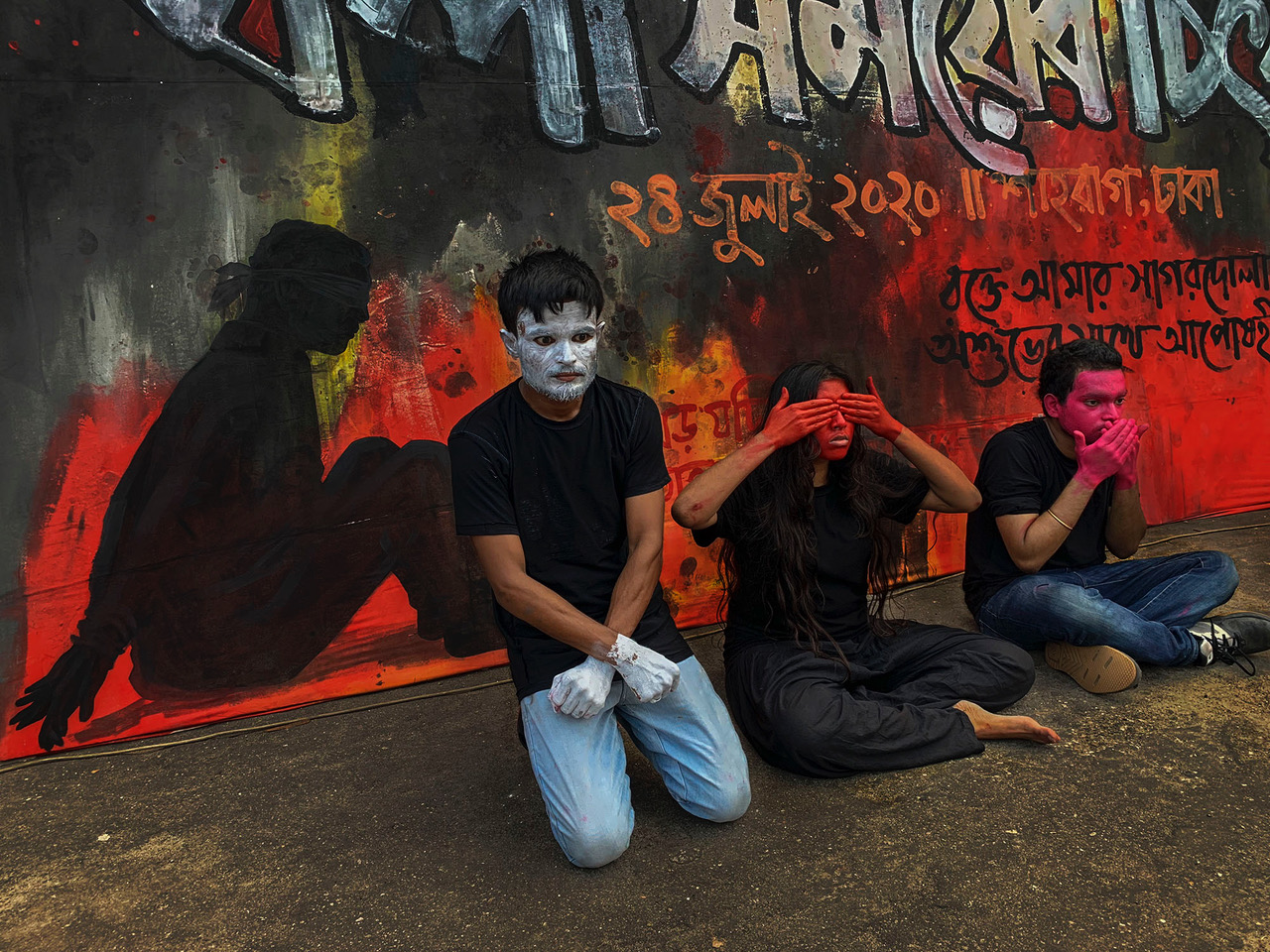 for Documentary Photographers and Photojournalists

‘The cry of the imprisoned’. A protest in support of the journalists, writers, poets, cartoonists and other artists, imprisoned under the draconian Digital Security Act was organised by Baki Billah, Sarwar Tushar and Shaikat Amin. The event featured songs, poetry, drama, illustrations and film at Shahbag Square in Dhaka, the equivalent of Tahrir Square in Bangladesh. A record number of arrests have been made during the COVID-19 period.

for Documentary Photographers and Photojournalists

The Lucie Foundation will be donating 50% of the profits received to support the ongoing efforts of their educational programs in photography, film and multimedia journalism. Based in Dhaka, Bangladesh, Pathshala /South Asian Media institute targets promising young photographers of the region.

Though an initial quota has been kept for women and people from marginalized communities, in the long run, Pathshala will only cater to the most promising talent regardless of class and gender. The idea is to take young professionals who, with the right guidance and opportunities, can break into the highest echelons of the international photographic industry and tell their stories to the world.

The Pathshala/ South Asian Media Institute was founded by photographer and activist Shahidul Alam, who received The Lucie Humanitarian Award in 2018.

THIS OPEN CALL WILL FEATURE 50 PHOTOGRAPHERS THAT WILL BE DISPLAYED IN AN ONLINE EXHIBITION ALONG WITH A VARIETY OF PRIZES LISTED BELOW.

GRAND PRIZE / ONE WINNER
Winner will be the photograph with the highest score overall in any category.

CATEGORY WINNERS / 4 WINNERS
Winners will be the highest score in the remaining categories. Categories remaining will depend on Grand Prize winner.

Paul Moakley is editor at large, for special projects at Time. He covers national news and issues such as Person of the Year and produced the Opioid Diaries. Previously, he was senior photo editor at Newsweek and photo editor of PDN (Photo District News). He lives at the Alice Austen House, as caretaker and curator of the museum.

MaryAnne Golon is the Director of Photography at The Washington Post. Before joining The Post in 2012, MaryAnne was the director of photography at Time Magazine and a senior photography editor there for more than 20 years. Before joining The Post in 2012, MaryAnne curated Look 3: The Festival of the Photograph and help guide the 2-year product build of a digital asset management system for a major non-profit organization.

She graduated with honors from the University of Florida with a B.S. in Journalism. Golon has received many individual and team picture-editing awards from the POYi (Pictures of the Year International) and NPPA’s (National Press Photographer’s Association) Best of Photojournalism competitions. Communication Arts, Society of Publication Designers, and American Photography have all recognized her work. She was awarded Picture of the Editor of the Year from the IFA Lucie Awards in 2013. She was twice selected for American Photo magazine’s list of the 100 most important people in photography.

Brent Lewis is a Photo Editor based out of New York City, co-founder of Diversify.Photo and from the greatest city in the world Chicago. South Side to be exact.
Brent is a photo editor at The New York Times working on the Business Desk, assigning visual coverage of technology, the economy, and auto industry.
Brent was a Photo Editor at The Washington Post. Formerly, he was the Senior Photo Editor of ESPN’s The Undefeated, where he drove the visual language of the website that is based around the intersection of sports, race, and culture. Before turning his life over to photo editing, he was a staff photojournalist with stints at The Denver Post, The Rockford Register Star and the Chillicothe Gazette.  Through the years his photos have been used by the Chicago Tribune, L.A. Times, Associated Press, Forbes, and Yahoo! News.

NayanTara Gurung Kakshapati lives in Kathmandu, Nepal and works at the intersections of visual storytelling, research, pedagogy, and collective action. In 2007, she co-founded photo.circle; an independent artist-led platform that facilitates learning, exhibition making, publishing and a variety of other trans-disciplinary collaborative projects for Nepali visual practitioners. In 2011, she co-founded Nepal Picture Library; a digital archiving initiative that works towards diversifying Nepali socio-cultural and political history. NayanTara is also the co-founder and Festival Director of Photo Kathmandu, an international festival that takes place in Kathmandu every two years. She served as the Festival Director for South Asia’s premier non-fiction film festival Film Southasia from 2013-2015. She has been a mentor for the World Press Photo Joop Swart Masterclass, was recently awarded the 2020 Jane Lombard Fellowship by the Vera List Center for Art and Politics at The New School, New York and is the chair of the 2021 World Press Photo Contest Jury.

Rena Effendi is an award-winning documentary photographer. She is an author of two monographs published in 2009 – “Pipe Dreams: A Chronicle of Lives along the Pipeline” and in 2013 – “Liquid Land”. Rena Effendi’s photography has been described as having a deep sense of empathy with a quiet celebration of the strength of the human spirit.

Rena Effendi is the laureate of the Prince Claus Fund award for Culture and Development. Her work has been exhibited worldwide including at the Victoria and Albert Museum, the Saatchi Gallery, Istanbul Modern, the Venice Biennial, NYC MOMA and other venues. Effendi’s photographs are in the permanent collections of the Istanbul Modern, the Open Society Foundations and the Prince Claus Fund.

Effendi has spoken and presented her work in global fora, such as the World Economic Forum in Davos, C 2 Montreal and the Tribeca Film Festival.

A frequent contributor to the National Geographic Magazine, Effendi has worked on editorial commissions for The Wall Street Journal, The New York Times magazine, VOGUE, Marie Claire, The New Yorker, GEO, The Daily Telegraph, Newsweek, TIME, The Sunday Times, New York Magazine and many others.

Andy’s work leverages thirty years of experience in entrepreneurial and social ventures with a common thread of visual storytelling, design, and technology. He works with people he admires & respects, on compelling projects that inspire me, with the intent of instigating positive change.

He founded FiftyCrows Foundation and stewarded the Mother Jones International Fund for Documentary Photography to support photojournalistic photographers worldwide, and was cofounder with National Geographic Fellow Chris Rainier of the National Geographic Society’s All Roads Photography program. He has curated over twenty photographic exhibitions in galleries and museums around the world and lectured on a wide variety of creative and business topics.

He is currently the COO of adventure media company ROAM along with co-founders Jimmy Chin, Andy Mann, Cory Richards, Chris Burkard, Andy Best, and Keith Ladzinski. Previously Andy was the interim CEO of VII Photo, co-founded liveBooks which built 15,000 websites for photographers, and co-founded strategic web design and development consultancy Adjacency, leading the evolution from start-up to building the first e-commerce solutions for Apple Computer, Patagonia, Virgin, LandRover, and many others. He lives alongside the ocean in Carpinteria, CA.

Deadline for submissions: May 31st

Who can apply?
Anyone can apply worldwide. All mediums of photography are acceptable. All submissions must be within the theme. Those images submitted that do not fall within the theme will not be considered.
Is there a limit to the number of Open Call submissions per artist?
No, you can submit as many images as you would like to however each image is a separate fee.
Is there a submission fee?
Yes, $20.00 per submission (single image) and $30.00 per submission (photo series – up to 5 images).
What images should I submit?
Submit the best images you feel represent the theme within the category of your choosing.
Is there a time period when the images needed to be captured?
No, you can submit images you have photographed recently or in the past.
How should I prepare my files?
Please prepare your files according to the specifications below:
• JPG only. (NO TIF, GIF, PNG, PDF files will be accepted.)
• 72 DPI
• Min 1,000 pixels shortest side
• File should not exceed 4mb
Can I send print materials, books or CD’s?
No, Lucie Foundation accepts online submissions only.
When will the prize winners and finalists be announced?
Winners and finalists will be announced this summer, exact date TBD.
How will I know if I was selected?
If you were selected for the Open Call, you will be contacted directly through the email which you provided in the submission form. The finalists will also be announced via the Lucie Foundation newsletter, website, and social media. Unfortunately, due to the volume of submissions, we are not able to notify if you were not selected.

THANKS TO OUR SPONSORS