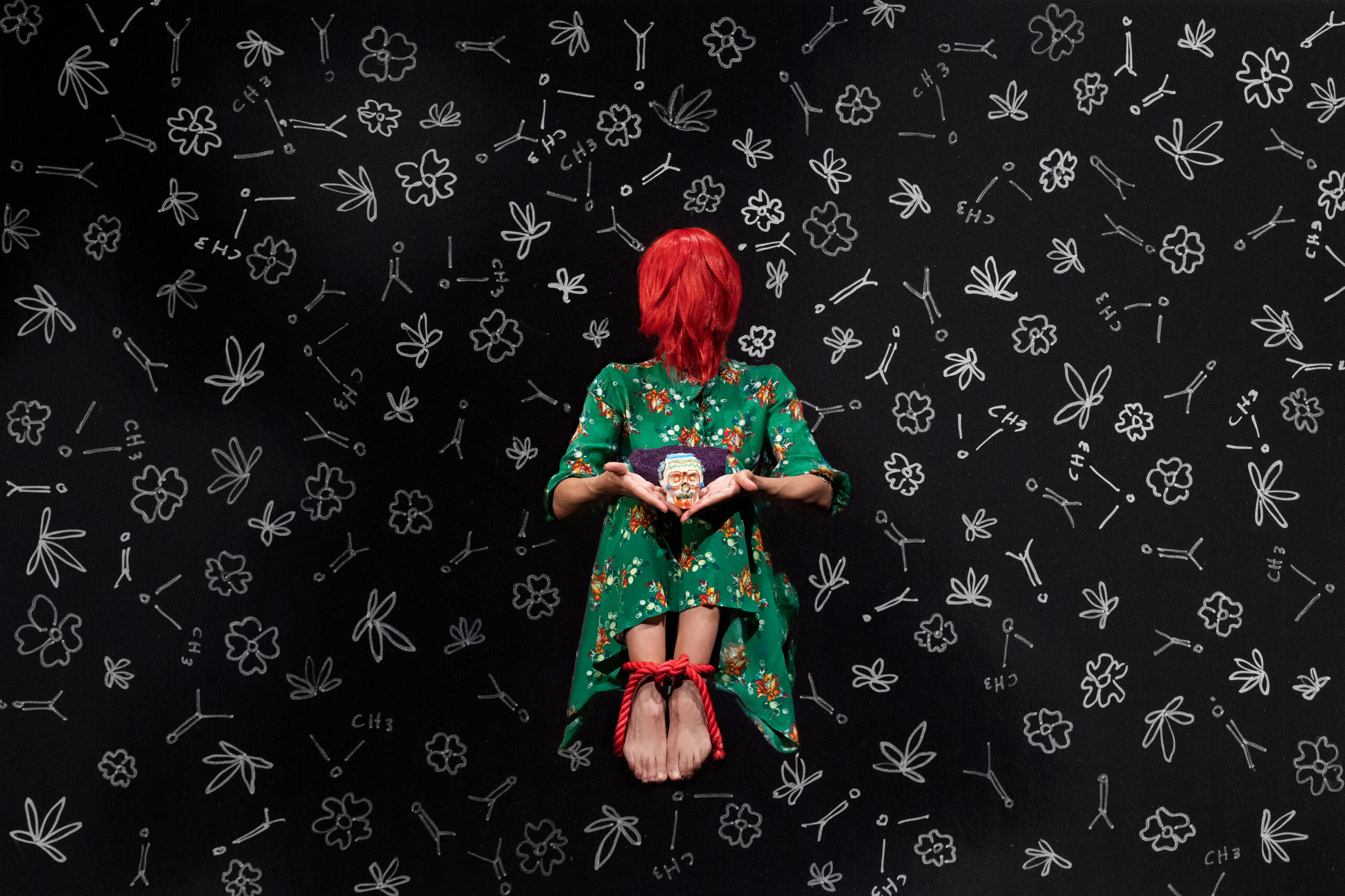 Originally from Mexico, Monica lives and works in the U.K. She studied Filmmaking, Scenography and Photography. Her photobook Your Photos could be used by drug dealers was acquired in 2014 for artist book collections at the Museum of Modern Art in New York, The Yale University Gallery and the Joan Flasch Collection at the Arts Institute of Chicago. In 2020 she was awarded a Firecracker Grant and was nominated for a National Geographic fellowship. In 2018 she was selected as one of ten artists for Les Recontres d’Arles New Discovery Award and was winner of The Photographers’ Gallery Bar-Tur Photobook Award in London. In 2017 she obtained the Magnum Graduate Award.

One of Monica’s latest work Possible Landscapes is a reconciliation participatory project for young people in post-conflict countries.

Monica is currently a nominator for the Joop Swart Masterclass.

The titles are based on internet search results found at different points throughout 2019.

These searches included the terms: Mexico, Mexican women, Mexicans are considered, Why Mexicans are.

‘Here to be caught’

‘How do you stop these people?’

‘All we have left are lemons’

‘We are all cheap labour’

‘From the shadows they never stop coming’

When and how did you get started in photography?

Part of my BA in Filmmaking was a film photography course. I first learned Filmmaking by shooting on 16 mm film and also learned to develop the film. I got hooked on the whole process of the darkroom and the physicality of it all so I decided to keep on taking photographs throughout my BA. The act of taking  photographs revealed a slower pace that I very much enjoyed and had not found when writing a screenplay or making animation films. Photography was the discipline that originated my fascination with ideas on perception and point of view. This fascination has remained through the years, it informs what I do today and how I do it.

There was a period in which I wasn’t sure how I would be able to afford being a filmmaker or a photographer. Later I discovered that traditional filmmaking was not for me but that creating images was at the centre of everything in which  I am interested. Once this became clear it was as if a whole world of possibilities opened up. Suddenly making images allowed me to listen to all these questions I have been carrying with me and couldn’t answer by any other means.

What did photography give you? What is it that you try to achieve with photography?

My work has gone through different stages. The point where I am at now involves finding ways to create visual vocabularies for what is unseen.

For example, in the case of my long-term project on space exploration, I decided to use Augmented Reality to “enrich” my photographs with ideas that are not traditionally considered when discussing space exploration.  In the case of ‘Second Nature’ I am using drawings and Augmented Reality to translate the power structures present in web search algorithms into a visible classification of human beings into groups. In this case I am focusing on Mexicans as I am originally from Mexico; recognizing of course that within the group ‘Mexicans’ there is immense complexity.

Through my last two projects photography has become a building block for something larger. What this ‘something’ is needs to remain open. This is why I develop projects in chapters that in themselves are building blocks of something even larger.

For me it is important to let the openness of the image breathe. Not because I am afraid of drawing conclusions, or making statements, but because I feel that this is where the power of images lies.

What drew you to pursue a project on this subject? How did the idea come about?

I have been wanting to work on a project on bias and discrimination for quite a while, but I have been afraid that somehow making work on this subject would pigeonhole me, or that it could be perceived as having some kind of chip on my shoulder. It was not until I worked with my latest project on space exploration that I discovered a profound interest in how it is that knowledge is built and galvanized into different stratums in our society. I am particularly interested in how, on a cultural level, visual languages build ideas.

I have also been wanting to create images that have a language of their own, something that is not immediately obvious to an audience and that demands some work. Without wanting the images to become impenetrable I consider it important that they are at some level imbued with their own set of rules and that these are not necessarily what a western audience is used to find as relatable.

As a Latin American woman living in Europe the last subject that people expect me to work on is something related to a subject such as Tech or Science, as they are still perceived as western endeavors usually pursued by men. I am not saying I seek to make work on themes I am not expected to work on, but I have learned recently that there is something poignant in highlighting this as a collateral element of the work I do.

‘Second Nature’ the project that the Lucie Foundation + Chroma Luxe Scholarship funded, has brought these two interests together. How does racial equality, and inequality, play in an era of technological prodigy. Technology promises a better future, and so I am asking the question “Who benefits from these promises and how?”. My intention is not to present tech as something to fear. At the same time, I believe that knowledge is power and so I am looking to inform myself by making this project.

What is your shooting process and workflow? How much of the project is staged vs documenting candid moments?

There is a documentary side to the project in that over the period of a year or so I have asked people if they would share with me an incident in which they experienced discrimination. I travel to Mexico as often as I can and so this part of the project took place over three different trips that lasted a month each.

After listening to quite a few difficult stories I felt that there was enough material to draw from for the making of the portraits in studio. I always knew I wanted to take these images over a neutral background. I wanted the emerging characters to appear as trapped, suspended, inside a non-descriptive space, like figurines that have been boxed.

As for the drawings on top of the prints they started as a suggestion of power.

The reason for which I work on projects over a long period of time is to allow a better understanding of what I am working on. Currently the drawings are changing, I am right in the process of changing my original idea, and so they are still changing as my research has grown in recent weeks.

How did your project develop and change between your start and end dates? What challenges did you face in the making of this project?

The project is shaped mainly by my research and what I learn along the way on algorithmic research and its current uses. The way it is developed depends very much on instinct, even if I set out with an idea this is only used as a starting point. I did not know the exact content of the portraits at the start, apart from them being in a neutral setting. In a way this is the greatest challenge. To keep myself open enough so I can react to what is happening in the day I am in the studio. This sounds easier said than done because as you know everything becomes an influence, from the moment I wake up, to the commute to the studio, to how may coffees I have had.

It sounds counter-intuitive, but it involves discipline to show up to make the work completely open. This requires discerning between what to drop from the day I am shooting and what to hold onto for as long as a year since I heard the stories of discrimination. This is what really shapes the shooting as I didn’t have access to the studio whenever I wanted. To be in control while losing control became a real balancing act. I have about three notebooks for this project and so while I was shooting it really helped to read back my notes of the stories people told me.

Another thing that has helped but was challenging was to develop again the discipline of drawing. Drawing involves a different part of the brain, so it has become essential to develop ideas for this project. This is one of the reasons for which I draw on the photographs. Drawing involves a physical process that made sense with what I am looking to achieve with ‘Second Nature’: A materialization of the power structures within the mathematics that shape our perception of ‘otherness’ today.

What do you find most fulfilling about this project?

To take part in a larger conversation regarding the use of technology and the power of data in our present and future lives.

Has receiving a Lucie Foundation Scholarship impacted your career, and if yes, how?

I live in London and until now my work has only been shown in Europe. The grant with the Lucie Foundation has been pivotal in getting my work seen outside the continent.

I have been working on the space exploration project since 2014, part of this is thanks to the way I have decided to work, but also part of it is because of funding. The Lucie grant allowed me to move into producing my next project. Grants like this have become indispensable in the growth of my work, without them it would take me even longer to develop and produce work.

What’s next for you?

An exhibition that originally seemed to be cancelled due to Covid-19 is happening. It is in Tampere, Finland part of Backlight Festival 2020 at the Tampere Contemporary Museum. I am very excited to be taking part in it as we are exhibiting the installation for ‘Ascension’. Under the current circumstances it will be a challenge to ship the sculptures from London to Tampere but I am looking forward to see how it all comes together. I am happy to show this work in particular as it speaks of the importance of paying attention to our planet. As lockdowns around the world start being lifted the need to look into our idea of Nature and reassess our relationship to it seems imperative.

I am also working on three different projects at different stages but the main focus is completing the drawings for ‘Second Nature’.

I was one of nine recipients of the 2020 Firecracker grant and this is helping out with making the final prints that I am hoping will be exhibited with Lucie Foundation once everything comes back from the pandemic. The idea of showing this work in Los Angeles has very poignant implications at different levels and so I can barely wait to test the work here.