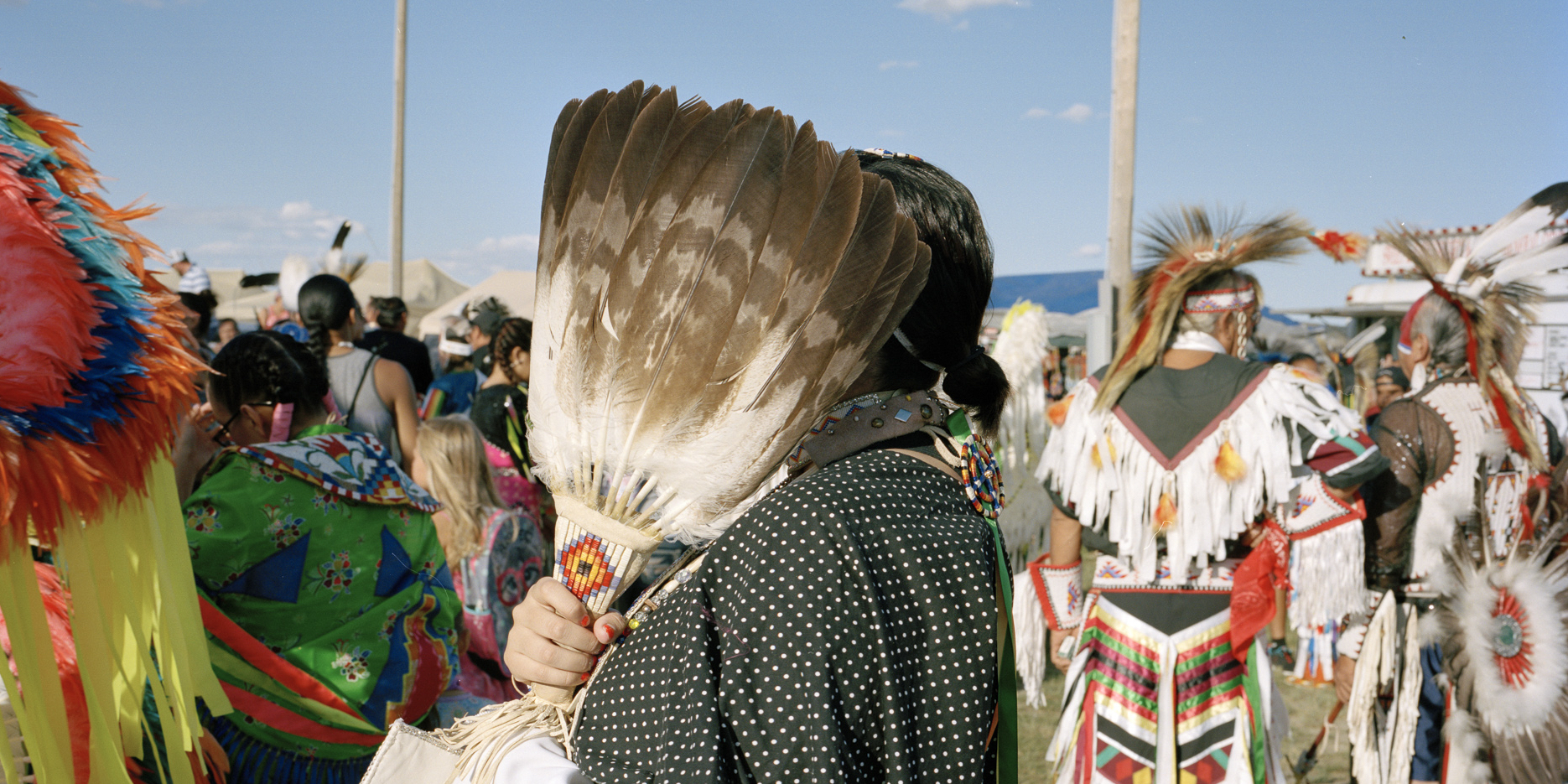 As Soft As The Earth Is

In the 1940’s the U.S. government forcibly relocated the affiliated Mandan, Hidatsa, and Arikara tribes to construct the Garrison Dam. It was an area the tribes had occupied for centuries. In a matter of years the land was flooded and the their ancestral home vanished under water.

Since February 2015 I’ve traveled four times to the Fort Berthold Indian Reservation to focus on this series entitled As Soft As The Earth Is. I was initially drawn to North Dakota out of curiosity, wanting to understand the scars fracking left on the land and the community. I’ve learned in the past two years that oil fits into a larger, more complex and intergenerational story of disenfranchisement, loss, trauma, and resilience. To address this history, which is written across the landscape of Fort Berthold, I’ve photographed the earth and the body of water that flows through the reservation. I have also photographed and interviewed community members who, like the landscape, carry the weight of history. Conversations with residents have underscored that while fracking is destructive and disruptive, decade of disenfranchisement by the government had already traumatized the community. As one individual remarked, “the tribe’s been through so many involuntary transitions, we’ve barely been able to get stabilized before another jolt hits.”

By combining portraits, landscapes, and excerpts from interviews, I’ve tried to visualize and evoke the experience of loss over generations.

When and how did you start doing photography?

To the extent which an eleven-year-old can have a meaningful relationship with photography, it was around that age that I really started taking pictures. A couple years earlier, the teenage daughter of some family friends secretly showed me a video she’d made of her and her friends hanging out smoking. I was enthralled and then subsequently obsessed with the need for a video camera of my own. Thanks to my parents’ unfailing support of my artistic endeavors (and some babysitting money) I got my camcorder and made videos for a number of years. As with many childhood hobbies, my interest in the video camera dwindled. But around this same time, I was becoming a nerdy-Francophile (and looking at images by Cartier-Bresson and Brassai) and at about age eleven I resolved to be a photographer. I bought my first camera, a Canon AE-1, with money from the babysitting fund. By thirteen I’d built a darkroom in my garage and spent most of high school building an identity founded on photography.

Over the years I’ve been asked on more than one occasion about how I became a photographer. Through this process I’ve crafted a personal narrative out of slippery memories from childhood and adolescence. Being presented with this question again and again for interviews made me curious if the story I tell had any basis in reality, so I consulted with my parents to see if and how our memories aligned. They corroborated the story about the family friend’s camcorder, and also reminded me of the polaroid camera they gave me when I was eight years old. My step-mom said there was no amount of film that would’ve satiated me, and that I persisted at making a picture until I felt it was right. On a family trip I accidentally left the camera in a taxi and was inconsolable. My step-mom said that it was as if I’d lost a limb.

What does photography give you?

I’ve been a photographer for as long as I can remember, it’s just simply a part of who I am. I relate to and observe the world around me through the lens and the frame of a camera. To me a camera can serve as a disguise when I want to look at something closely; it is a tool I hide behind to do the looking I want to do. It’s an empowering feeling to point your lens towards something. But this is something I’m mindful of when photographing other people. It’s an intimidating thing to have a lens pointed at you, and I think this is important to keep in mind when photographing others.

What is it that you try to achieve with photography?

In the last decade I’ve focused on a broad range of subject matter but underpinning my work is a consistent occupation with themes of loss and absence. My interest in these subjects stems from childhood and as I matured as a photographer, I transformed personal experience into broader themes with wider resonance. I’ve photographed my two younger sisters, who are related to me, but who are unrelated to one another, documenting their transition from childhood to adolescence. For several years my work concentrated on Iceland’s landscape, where I used the visible geothermal qualities of the island to metaphorically represent the internal fear of being lost or left behind.

Broadly speaking, I’ve looked to places and communities where literal or metaphorical tension exists below the surface. So I guess you could say that I try to achieve a visual expression of these interests using photography as my medium.

What do you think makes a truly great image?

I think the picture has to tell you something you didn’t already know.

Where do you get your inspiration from?

Specifically for this project, I thought often of August Sander’s People of the Twentieth Century, a democratic portrait of a society at a specific moment in history. Erika Larsen’s Sami – Walking with Reindeer, which is both sensitive and intimate and yet grand and majestic. Various books, including Everything In Its Path by Kai T. Eriksson.

In general I’m inspired by films, literature, and other artists including Rineke Dijkstra, Gerhard Richter, Christian Boltanski, Rinko Kawauchi. Recently I saw an exhibition of Alessandra Sanguinetti’s new work from France that I was totally inspired by.

What drew you to pursue a project on this subject?

In late 2014 the New York Times published a series of articles about the downside of the oil boom. Throughout these articles the act of scarring came up repeatedly; individuals scared from injuries working on oil rigs, the landscape scared from fracking and water waste spills. And it just struck a chord. I felt there was a bigger more complex story to tell about the people living through this kind of trauma and so I was pulled north. Thanks to my very dear friend Teresa, I was able to connect directly with people on Ft. Berthold, as coincidentally this is where her family is from.

How do you go about preparing for the interviews and portrait shoots that make up this project? Did you connect with your subjects prior?

To prepare for the interviews, I read a fair amount of non-fiction and news articles on the subject though there is always more one could read!

As an outsider in this community my primary goal was to learn as much as possible about the history of the M.H.A. Nation and its residents’ personal experiences through conversations with the people living through this change. A vital part of my process has been to spend extended time with my subjects prior to photographing them as I’m trying to translate sentiments and ideas expressed verbally into visual imagery. I’m trying to create photographs that I hope fairly represent the various attitudes of the community.

How did your project develop and change between your start and end dates?

I think the biggest shift occurred thanks to the generosity of my subjects. I just know so much more now. When I began this project, I was looking at the contemporary issue of fracking explicitly. But through conversations with people who I’d now consider friends I’ve started to understand how in many ways what’s happened on Ft. Berthold is yet another iteration of disenfranchisement. Having a better understanding of this intergenerational story, I’ve been able to expand my visual approach to the work.

What challenges did you face in the making of this project?

The biggest challenge that I personally face and which I’m still working through, is how to make sensitive work about people and a place where you’re not from. I’m challenged trying to photograph a story that I feel like I’m still learning.

What are the biggest obstacles you’ve had to overcome in your career as a photographer?

Specifically I’d probably say myself, and my own self-criticality. But overall being a photographer might be akin to running a hurdles race. There are brief moments when you’re coasting, but mostly, it’s a series of hurdles that somehow you’ve got to fling yourself over. They can be financial or personal obstacles, such as moments of self-doubt. But they’re always there and sometimes you trip over them. At the end of the day, it’s a question of endurance and having the ability to pick yourself up and keep going because you love what you do, even if you’re tired, or you get cynical and feel like ‘what’s the point,’ or you’ve fallen down. You get up and keep going.

Do you think it is important to participate in photography competitions, awards, and scholarships?

Yes I do. Forcing yourself to put your work out there can be hard, but it’s worth it and it’s good practice.

Has winning the Lucie Scholarship impacted your career, and if yes, how?

Winning the Lucie Scholarship, like winning any award, is a wonderful form of validation that encourages you to keep moving forward. I was able to continue this work on Ft. Berthold thanks to this scholarship, and I’m sure this experience will have unforeseeable positive impacts on my career in the future.